X
X
Back to the top

Two of the audiobooks I narrated in The Hope Hadley Cozy Mystery Series have been compiled by the author, Meredith Potts, into a 2- book set, Hope Hadley 2-Book Cozy Mystery Set. The set is available on Audible, Amazon, and iTunes, and includes the two audiobooks, Hurricanes Can Be Murder and Murder is a Deadly Brew.

Hurricanes Can Be Murder:

When Hope Hadley’s Florida hometown is hit by a hurricane, she is devastated. The amateur sleuth’s problems don’t stop there, though. During the aftermath of the storm, a dead body is discovered.

At first, it appears that the victim drowned during the storm. After an autopsy is conducted, the police realize that foul play was involved. At that point, it is up to Hope and her detective brother to solve the case.

Will they be able to apprehend the killer? Or is there a different type of storm on the horizon?

Murder Is a Deadly Brew:

The city of Hollywood, Florida, is just starting to rebuild in the aftermath of a hurricane, when a new disaster strikes.

A coffee shop owner is found murdered. As always, amateur sleuth Hope Hadley teams up with her detective brother to solve the case.

But the investigation turns into a dangerous brew. As the case heats up, will Hope and her brother get burned? Or will justice prevail? 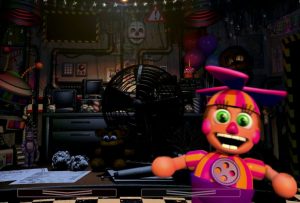 I’m happy to autograph your FNaF stuff. Just send me an email, and I’ll make it happen!

I’m narrating another cozy mystery in the Melody Jane Clue Detective Series for the amazing writer, Meredith Potts: Private Eye and a Craving for Pie!

I’ve been booked to voice the cutest little puppy, Charlie, in an upcoming series! I’ve already voiced a bunch of episodes… it’s SO adorable! More on this in a bit! Here’s Charlie…